Sestriere is located at the center of the Via Lattea Ski area, which includes four other Piedmontese towns, Sauze d’Oulx, Sansicario, Cesana and Claviere, besides the French Montgenèvre. It is one of the largest skiable domains in Europe with over 214 tracks, for a linear extension of 400 km and 89 lifts. The Sestriere National School is located on the slopes, near the departure of numerous ski lifts.

120 Km of runs covered by the programmed snowmaking network. 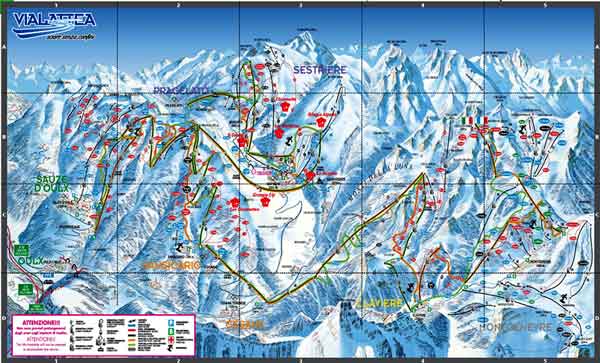 THE OLYMPIC SLOPES IN SESTRIERE

The most famous run was equipped with lighting system as early as 1994 to host the first night World Cup race. Since then all the slalom events held at the Colle, including the competitions of the Alpine Ski World Championships in 97, took place under the light of the spotlight.

The slalom competitions of the XX Olympic Winter Games in Turin 2006 will always be held on this track, located in the central area with arrival in the village and served by the Cit Roc chairlift.

It is a track that meets the needs of the great champions, but also the fun of tourists who, in the established evenings, crowd it until late.

The RUN dedicated to Gianni Agnelli hosting the giant slalom races. Made famous following the competitions of the Alpine Ski World Championships in 97 and the 2004 World Cup Finals. It will also be the scene of the giant men’s and women’s slalom competitions of the XX Olympic Winter Games in Turin 2006.

The departure is reached via the Cit Roc chair lift and the Sises ski lift. The initial section is very technical and challenging on a wall with a slope of more than 50%, to arrive on a flat slope near the Alpetta and then again you face a steep and a series of very technical steps. The arrival stage is in the village and coincides with the arrival of the slalom.

It hosted the free and super giant downhill races of the Alpine Ski World Championships in the 97 and the 2004 World Cup Finals and will be the track on which the men’s fast races of the XX Olympic Winter Games in Turin will take place.

The departure is at the top of Mount Motta, at an altitude of 2,800 meters, and is the highest point of the “Via Lattea”, where you can enjoy a wonderful view of all the surrounding mountains. The initial section is reserved for really expert skiers, as the maximum slope reached and of almost 60%, and you can admire on the left going down the “Salto dell’Angelo” faced by the Champions during the downhill races. For the less expert skiers it is possible to follow the trail from the detachment of the Chisonetto-Banchetta chairlift without taking the Motta ski lift.

After a stretch diagonally, the trail runs on plateaux in total absence of vegetation, given the still very high altitude, drawing curvoni, the “Esse Azzurra”, which make it particularly dynamic and varied.

You then arrive at the “Piano Paradiso”, which allows you to catch your breath before entering the woods of the “Acque Minerali”, a challenging stretch characterized by changes in slope, leading to the final wall in Sestriere town.